You are here: ENGLISH » Workshops 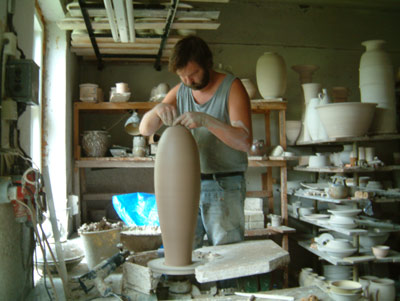 In this section we would like to inform you about upcoming workshops as well as providing some 'remembers' about past workshops.

I'm conducting workshops for a long time. When I started with throwing workshops for beginners I was a bit surprised that they had fun with it: Usually the learning curve is very flat and the students have to have a good frustration tolerance. Growing older I think there is something special about the way I learned throwing and I'm teaching to throw.

I think this has something to do with my traditional east German apprenticeship. I emphasise this east German tradition for several reasons. I imagine from a foreign perspective it is hard to believe that there are differences in throwing traditions between east and west Germany. But this was also hard to believe for me when the wall came down. The most conspicuous difference is that we in the east have special words for every special grip. Maybe during socialist times a special culture of throwing survived, a culture based on old technics, developed and taught by generations of past potters. Having words for each step of the throwing process implicates that there is a system of throwing technics which makes it a lot easier to teach this very complex process. And it is my experience that this system makes throwing a lot easier. For being not misunderstood: throwing is hard physical labour and the learning curve is still flat, but with the right technic it can be great fun with visible progress and a healthy back even at the end of a production potters live. 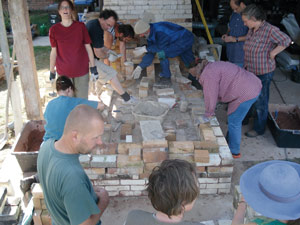 In 2008 Steve Harrison conducted a kiln-building workshop at my place. Since then I have a small bourry-box kiln which is fine for woodfiring workshops. I.e. we had a great time with Paul Davis and Masakazu Kusakabe firing this kiln.