You are here: ENGLISH » Dinnerware

Dinnerware for Restaurants and all Food Lovers 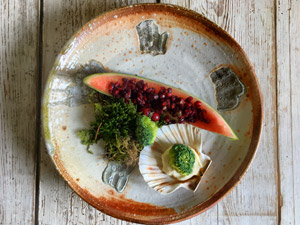 It looked as if there was only porcelain for the European star chefs for a long time. Pure white and round, later also different forms. But most of the gourmet-restaurants or TV cooking-shows seemed to use always the same kind of white porcelain dinnerware which is also in use everywhere else. It looked as it was insignificantly on purpose: the gesso-grounded canvas in the culinary field, the invisible frame for the chef's masterpiece. And it seems that this is changing during the last years. More and more chefs are looking for a collaboration with potters and look at dinnerware more as springboard and source for inspirations. Not only painting with food on white canvas, more accomplishing a collage that had been started by the potter.

And I think that my pots are only finished when they are used for drinking and serving good food.

Inspired by Japan – Made in Germany 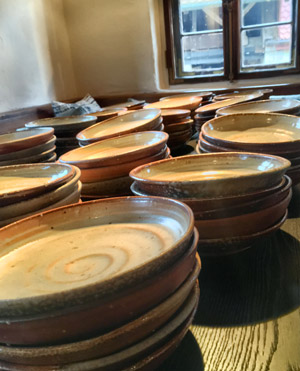 It seems that porcelain was the gauge not only for chefs, also for potters in Europe. The whiter and cleaner the clay was, the better. It was covered by slips and proceeded until it had lost his character. In contradiction Japanese potters tried to express the character of the clay, the glaze and the firing process. And that develops a liveliness which is impossible to achieve with industrial proceeded clay and glazes. That's why I'm still mixing my own clay bodies; a hard work that is hardly done anymore by most of my colleagues. Many of my glazes consist of crushed and milled stones, wood ash and different local clays. They are giving something like a "terroir", a strong connection to the surrounding landscape and geology. There is a visible difference to those glazes coming ready made from the next ceramic supply store.

I was taught to throw perfectly during my apprenticeship and after. Thinly and evenly without leaving any noticeable marks. Later I was fascinated by the liveliness and expressivity of Japanese ceramics and even later I realised that this was not only due to the specific material speech but also to the way the material was treated. It seems that the throwing, trimming and firing process in Japan was designed to produce marks, memories of the potters hands and tools that turned into stone. That leeds us to another very important step in producing pottery: the firing. It seems in Europe that was seen as a kind of necessary evil – in contradiction to looking at it as a matter of design. Here wood kilns were built so that the fire had as less as possible impact on the surface. That was totally different in Japan. Here they had (and have) so called "Anagama's", very inefficient machines, consuming insane amounts of wood. But those kilns transport such a lot of ash on the pots and produce all kinds of fire marks that the outcome looks like a record of the long and heavy firing process. I had been always fascinated by wood fired pots, not only those from Japan, but also old salt glazed stoneware pots from Germany.

But aside the aesthetic quality wood firing also generates a high functional quality: High temperatures above 1320°C are needed for melting the wood ash on the pots. Often porcelain isn't fired higher these days. So that gives high strength and solidness which is of special importance for restaurants. 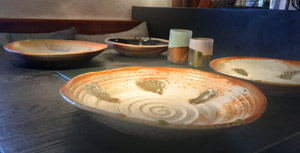 It looks as if the need for hand crafted dinnerware has been growing over the last years in a way that even industry is picking up what looks like a trend. Steelite calls a whole product line "Craft", which "is inspired by hand-crafted, simple country wares made by generations of potters over hundreds of years." There are some built-in irregularities, but still the plates are coming from the ram-press ore other machines.

I'd like to produce dinnerware that could be recognised on the first view or touch as something that is made by my hands and not by a machine. And I hope that the liveliness of the surface and the form together with the food will provide an unforgettable event for your guests.

I'd love to develop special dinnerware for your needs and rooms. Just let me know.

I plan to have some plates at my web-shop in May/June. Prices for restaurants will be on request. If you are interested in having a look on a small part of our production line right now , you might go to the plates gallery.