You are here: ENGLISH » Articles » Ceramics Art and Perception 2018

Adapts to Changes after the Fall of the Berlin Wall 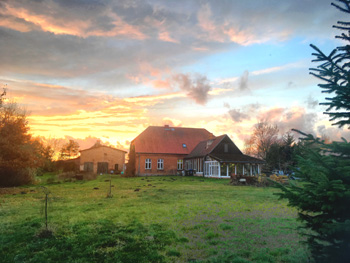 Markus Böhm lives on a piece of property at the end of a narrow lane in Alt Gaarz, a small village north of Berlin, Germany. To get to Lake Mueritz Pottery, one has to drive past fields and meadows, past a single church and five houses. Often the only sounds heard are created by the cranes and the wild geese that live on this piece of paradise between two lakes. Boehm purchased the property in 1989 and began setting it up as a pottery studio where he could have his own apprentices once he passed the rigorous state examinations to become a master potter. Indeed, Boehm and his future wife, Ute, were both certified as master potters in October 1989. By then, the people living in the GDR knew a ‘huge change was in the air’. A month after Boehm became certified the Berlin Wall fell. It would be some time until this young potter would fully realized how this single event would change his life from all that he had know previously.

When Boehm graduated from high school, all he wanted to do was to study ceramics at the University of Halle, an institution proud of its Bauhaus history. Having discovered that a large number of very talented young people also wanted to study at Halle, Boehm decided to take a different path. He set about looking for a mentor. He believed that this would lead to him being a skilled worker, a path that meant he could become a craft master running a private workshop with his own apprentices. Boehm found a master, Mario Enke who agreed to help him. Enke was a legendary potter known for his thinly thrown almost sculptural vessels with their rich copper and crystalline glazes. Enke was known as someone who experimented and he would try various glaze recipes and was often know to fire the crystalline ware in a wood kiln. He was also, at the time, one of three East German members of the International Academy of Ceramics in Geneva, Switzerland. To become certified as a master potter, Boehm studied with Enke for two years. During that time, he had to pass numerous throwing examinations demonstrating that he could throw various shapes in sizes of thirty, forty, and fifty centimeters with appropriate thickness and shape. This was accompanied by theoretical lessons in clay preparation and glaze calculation.T The students then were required to have a final formal exhibition. It was a very special day, that October, full of relief and hope when Boehm was certified a ‘Master Potter'. 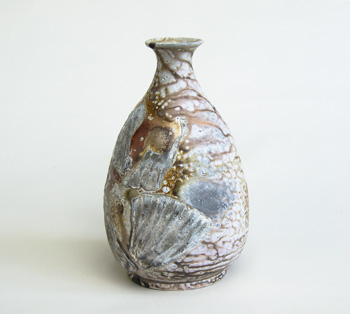 The area of Germany where Boehm was setting up his studio, Mecklenburg-Vorpommern has the most wood-fired kilns in the whole of Germany. When the young potters began to set up their studios in the region in the 1970s, wood made perfect sense as a fuel. The area is covered with majestic forests and electric kilns were difficult to obtain. Most built small kilns like the Phoenix Fast Fire. The clay in the region was only good for bricks and for glazes. Stoneware clays had to be obtained from other parts of the GDR, often through trade. It was here that the young people started experimenting with salt glaze something that interested Boehm. During the period from 1945-89 when Mecklenburg-Vorpommern was under the Soviet Socialist system, the potters working in East Germany were highly respected, just like traditional Japanese potters. Their work was highly valued. Boehm says, “Now the era of Socialism only exists as a memory in the minds of the inhabitants who lived to experience it. Just try to imagine a world where human relationships meant everything, but money had little value. This is because under Socialism there was a lack of nearly everything except the basics of daily life. People called it a deficiency-society”. The potters took “the earth and made it into something valuable”, beautiful wheel thrown pottery to be used in the home and for bartering. So instead of always using money to purchase the pottery, the buyers would often trade something difficult for the potter to get. Raw materials for creating ceramics were hard to find. Boehm began to collect everything he could during this time. For him, it was a survival technique. Society existed in this way for more than four decades. Friendships and individual connections were the most important, even more so than money.

For Boehm, the fall of the Berlin Wall brought dramatic changes to his life. He says, “Imagine 17 million people going through a time warp and waking up in a different world where all of the rules were different”. At the time, East Germany was nearly de-industrialised. The official unemployment rate hit 25%. People spent their time waiting in lines at the job centres. Everyone was anxious. And all of a sudden, no one was interested in pottery anymore. Boehm lost all of his customers over night. He says, "My life felt like a dead-end street, but it was too late to turn around. How was I going to adapt?” 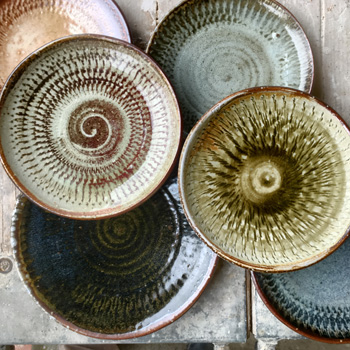 The first thing that he set about doing was changing his product range. There would always be a market for domestic ware. And he was lucky, the lake area where he lived became a popular tourist destination. Little by little his sales increased. He built a showroom and added some guest rooms.

Looking back, Böhm says, “I find it funny now that I employed strategies learned in Socialist times when building relationships and community was so important”. He joined craft and pottery associations while, at the same time, he taught himself graphics and web design to assist with the volunteer work he was undertaking for these organizations. He also set about organizing exhibitions at the common gallery in Rostock while hosting symposia at his workshop. One of the last was when two Koreans and a Chinese potter took part: Si-Sook Kang, Kap-Sun Hwang and Wu Zhou. Si-Sook and Kap-Sun had studied in Germany at Kiel, while Zhou was already a professor at China National Academy of Arts in Hangzhou. For Boehm, he found that he was learning from everyone. He said, “The contact with East Asian ceramics on a working level was very important and exciting. After this collaboration, I had so many ideas, enough for years, and Kap-Sun’s enthusiasm inspired me.” 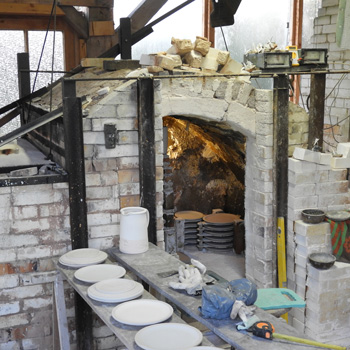 In 2007 Böhm began making plans for the first European Woodfire Conference. As he was making preparations, the Australian ceramist, Owen Rye suggested to Boehm that he come to the Australian Woodfire Conference at STURT, a college and craft centre at Mittagong, not far from Sydney. There he could see how they organized their events and maybe get some helpful ideas. Böhm was excited at the possibility of sharing with the Australian wood firers and gladly accepted the invitation. The residency at STURT turned out to be one of those rare opportunities for learning because Boehm was forced to use different materials and fire a different kiln other than his own. He also got to work with Paul Davis and Yasuo Terada. Boehm said, “It was the best introduction into Japanese ceramics one could imagine. Terada is a potter with a long enduring family tradition and Davis, the STURT potter at this time, had been working in Japan for seven years”. In fact, Davis was to be very influential on the direction that Boehm took in his work. Boehm was also able to visit Sandy Lockwood’s kiln yard and see her impressive Bourry-box kilns. Another potter whose kiln building knowledge impressed him was Steve Harrison. Boehm says that "his slogan ‘laid back woodfiring’ sounded promising". The following year Harrison was invited to be the leader of a kiln building workshop at Boehm's studio. That workshop reminded Boehm of "the power of community" for in just seven days, friendships were made, a kiln was built, loaded, fired, cooled and unpacked. The bonds continue to this day while the kiln was one of the first Bourry-box built in Germany. Wood firing workshops continued at Boehm's studio, and they included some legendary figures in the international wood fire community such as Paul Davis, Masakazu Kusakabe, Marc Lancet, Judith Duff and Chester Nealie. Each had an impact on Boehm as his work adjusted to a new clientele and his knowledge of the wood firing community grew. One other workshop that had a huge impact on Boehm’s practice was the 2010 EU financed soda workshop in Tuscany organised by Pietro Maddalena. This workshop led to Boehm beginning to experiment with soda firings, something that has made an aesthetic difference in his work. Perhaps not for Boehm, but for the international wood fire community, his organization of the first 2010 European Wood Firing Conference at Brollin was a major event bringing together individuals from around the world, creating the type of personal connections that Boehm values. This event was the spring board for the 2014 European Wood Fire Conference organized by Priscilla Mouritzen at the International Research Center in Skaelskor, Denmark where Boehm was a panelist. Each event celebrates new friendships, inspires ideas for collaborations, and possibilities for new creative directions. He dreams of being able to work in Japan one day. 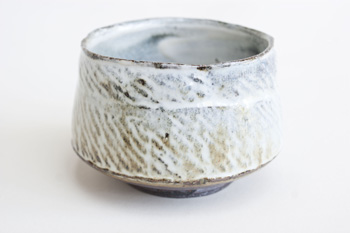 Boehm faced every challenge, and today his life and work are more vibrant by the extended network of friendships that he has made and his joyful play with materials. He sells his pottery at markets throughout Europe, through his showroom and special commissions for restaurants, as well as on special holiday kiln opening days. The graphic design work that Boehm taught himself enabled him to create his website where his ceramics are sold online to customers around the world. He now catches himself laughing when he hears his customers say that the showroom of Lake Mueritz Pottery is at the end of the world. Boehm's answer to them is always, "No, it isn't. It is the beginning".

«
‹
Seite 7 von 7
Strathnairn Residency - some pictures
|
Markus Boehm
|
General
Here you can find some pictures about Strathnairn and our work there.
Read more...
MueritzKeramik at the Sturt Gallery
|
Markus Boehm
|
Exhibitions/Markets
Ceramic made by Ute and Markus Böhm presented at the Sturt Gallery
Read more...
Australian movie premiere of the film "Laid Back Wood Firing"
|
Markus Boehm
|
General
The first public performance of the film "Laid Back Wood Firing"  took place successfully on Saturday, the 7th January, 2012, 1.30 at Sturt Clubbe Hall.
Read more...

Dr. Mary Ann Steggles is Professor of Art History and Studio Ceramics at the School of Art, University of Manitoba, Winnipeg, Canada. She is a researcher, writer, juror and curator of contemporary ceramic art. Her current research focuses on the impact that Vietnam era resisters had on Canadian ceramics history and international woodfiring